For Justin Hofmeister, NATS Lead Instructor and owner of Hofmeister Tree Service in Centralia, Washington, arboriculture and tree work runs in the family. In fact, Justin can trace his family’s roots in the tree industry back at least five generations. 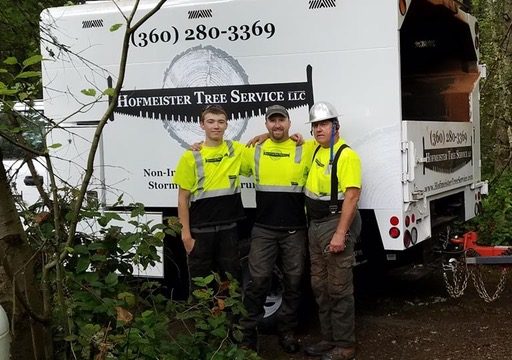 “My dad got started because his dad did it, and his dad did it,” explains Justin. “Nicholas (Justin’s son) is actually sixth generation tree worker. I can’t date my great-great-grandfather actually doing logging. I know he cut trees, but I don’t know if it was formal logging.”

Justin says his dad Jim logged right out of high school, and that he moved up to Alaska to live with his sister and log in Petersburg, where he was a high rigger. After his time in the Army, Jim moved to Centralia and went to work for Weyerhaeuser, where he set chokers and worked his way up to hook tender; he also cut timber.

“My dad had a company called Hof’s Tree Topping, and my brother and I would go out with him at a pretty early age, pulling branches out of the way and gassing up chainsaws,” Justin recalls from his childhood.

“All through my teenage years, I remember helping my dad on tree jobs – running ropes for him, things like that,” he continues. “It was very informal; to help people out and make some money.”

Over time, “people kept calling and calling and calling and we had to turn down work because we weren’t licensed and bonded.” When he realized how much work they were losing because of that lack of documentation, Justin decided that they should go ahead and pursue it. “From there, things started progressing and we were working all the time.”

As their company grew, Jim and Justin began focusing on safety within Hofmeister Tree Service and the industry as a whole. They saw a need to promote safe work practices both internally and externally, and wanted to share the message of safety with their fellow arborists. So in 2015, father and son attended Train the Trainer and joined the NATS team, with Jim performing safety monitoring and auditing, and Justin starting off with safety auditing and moving into the role of Lead Instructor in 2019.

As for the sixth generation, Justin says Nicholas “has been around NATS concepts, role models and mentors essentially since he started working.”

“Working with other NATS guys, and with my dad, Nicholas has seen a huge variety of different climbers and has had a pretty good apprenticeship,” says Justin. He encourages Nicholas to “go to work with anybody but me. The father son thing is tough when it comes to training. I want him to get good training and to keep an open mind. When he listens to other people, it’s more beneficial to him.”

Following in his father and grandfather’s footsteps, Nicholas attended Train the Trainer last December in Hume, California, and has done some safety auditing and assistant instructing as well.

When asked how he would describe working alongside his father and son as part of the NATS family, Justin responded in one word, “proud.”

“There is an incredible amount of pride knowing there are not a lot of multi-generational trainers in this industry,” Justin explained. “Watching my son, who is new to this industry, assist on a training and having attendees come up to him afterwards congratulating him on a job well done is everything. And then on the other side, watching my father, who has a wealth of knowledge and experience, sharing his message of safety with trainees. Well, let’s just say I’m one proud son.”

“This experience of working alongside my son and my father, both as a trainer and an arborist, is beyond words. I am proud of the legacy we have built as commercial arborists and the legacy we’re building to improve safety in this industry.”